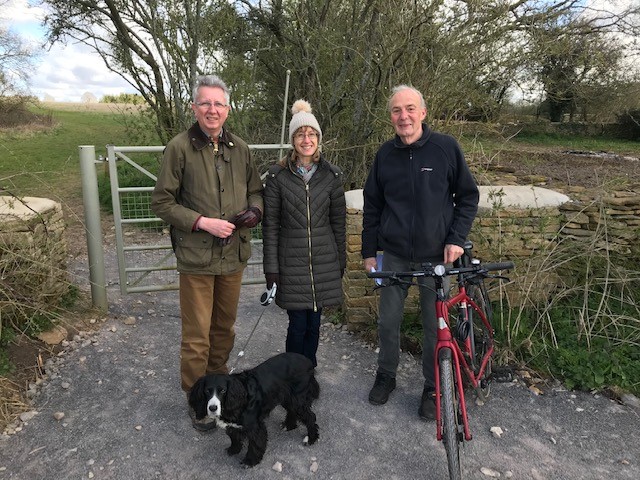 John and Nicola Swanton – with Lottie – being taken for a walk along the Tetbury Trail by volunteer project manager, Paul Lockley © John Swanton, Cotswolds National Landscape Board Member

The ‘Trouble House Halt’ gets a mention in the vintage Flanders and Swann song – Slow Train – which laments the Beeching cuts to Britain’s railway branch lines in the 1960s.

One of those lines, between Tetbury and Kemble, was closed in 1965, and is being brought back into life for other forms of transport.  About a mile of overgrown former rail line has been cut back and given a limestone base, making it a dry and accessible path, which can now be easily walked from Tetbury to the Trouble House pub – ‘The Tetbury `Trail’.  This link has been designated ‘a bridleway’ so horse-riders, cyclists, wheelchair users, pushchairs and walkers can benefit from this link.

The Cotswolds National Landscape has contributed funds (along with many others) from its ‘Caring for the Cotswolds Fund’ to help finance the mile or so of new track from the outskirts of Tetbury to The Trouble House pub.  Volunteers did an excellent job cutting back the undergrowth, whilst the limestone path was installed by professionals with the correct equipment.

The Tetbury Rail Land Regeneration Trust and their volunteers are to be congratulated for their work and tenacity in securing this accessible route through the countryside and making ‘The Trouble House’ a destination once again. 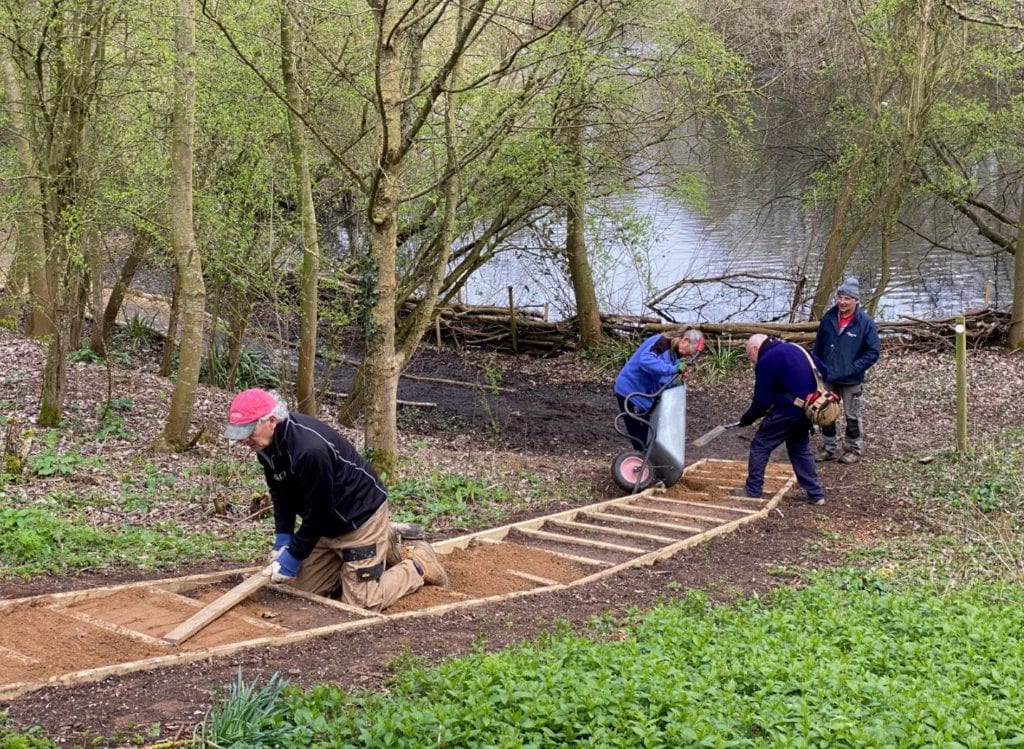 On the edge of the village of Beckford, between Tewkesbury and Evesham at the north western end of the Cotswolds National Landscape, lies a three hectare nature reserve. In the 1980s, it started being used by Huntsman’s Quarries to extract gravel and sand. Later, Huntsman’s restored the land to a conservation area, and in 2008, the local community bought the site using grants, donations and fundraising events, and so established a permanent reserve, open to the public for free.

Mark McCauley, Chairman of the Trustees, explained that the Reserve has been even more popular during the pandemic. “We have seen many more people finding comfort in spending time amongst the trees, wildflowers and wildlife, with some people coming for the first time. However, the path round the reserve includes two slopes, which become slippery with mud when it’s wet.” Caring for the Cotswolds contributed nearly £1,700 towards the costs of installing safer steps. “This has made them more robust, easier to use, especially for elderly people and anyone who finds the terrain difficult, and easier to maintain in for the future.  Importantly, it will also help to conserve the habitat as visitors will be encouraged to keep to the designated paths.” 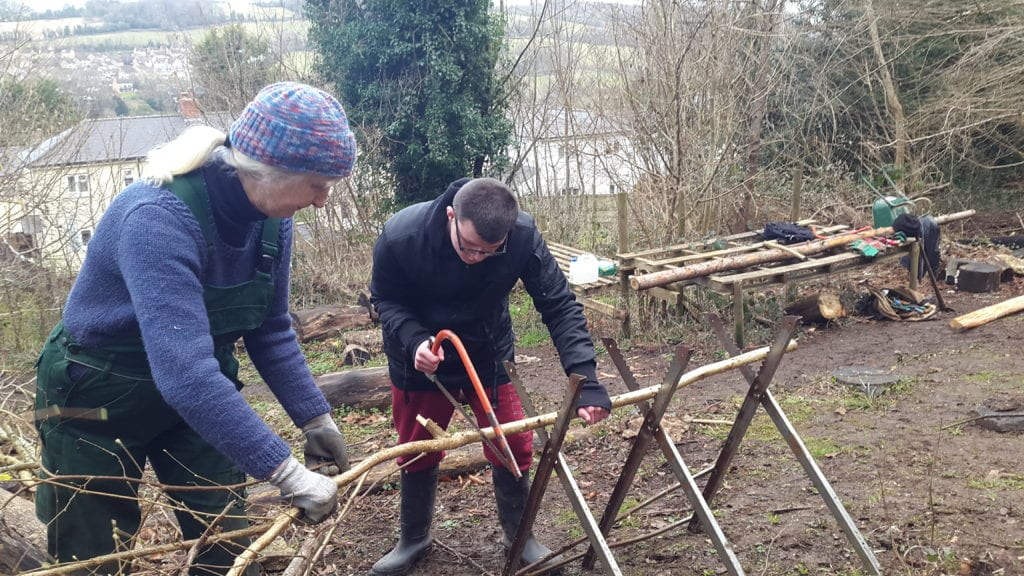 Work has begun on many of the new projects supported by Caring for the Cotswolds, including the new Education shelter at Sladebank Woods CIC © Martin Jakes

It might still be cold and wet but that hasn’t stopped the young people from The Shrubberies School and The Apperley Centre starting the construction of the new Education shelter at Sladebank Woods. Built by volunteers with a range of abilities, it will be the focal point for future events, including bringing young people with severe learning difficulties into nature to develop practical and life skills. Once complete, the impressive pole structure will have a six metre diameter and will be at the heart of a wider project to create accessible pathways and compost toilet facilities. The materials are locally sourced from the Bathurst Estate and Westonbirt.

Sladebank Woods sits on the edge of the Cotswolds near Stroud. It is the westernmost point of a woodland running out to Swifts Hill and beyond. It was grazed by cows up until 1960 and has two areas of remaining wildflower meadow. The project will capture and tell the story of how it became a mixed woodland and now sits in the landscape of the Slad Valley. The aim is to create a woodland that is resilient and diverse in the future. Involving and educating people is absolutely vital to this.

14 new projects supported by Caring for the Cotswolds! 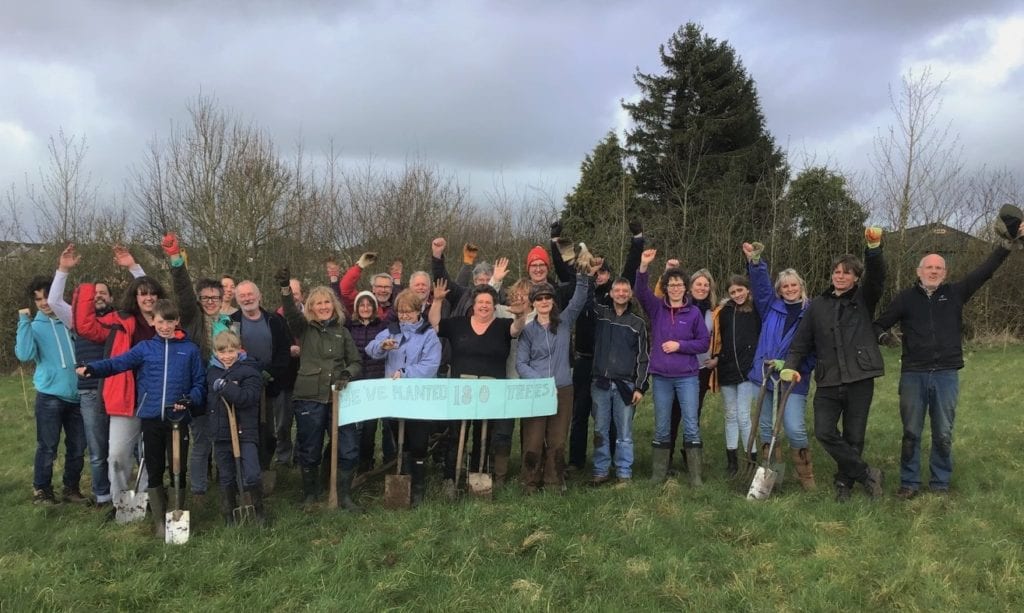 Volunteers after planting 180 trees at Middle Hill, one of the wildlife sites that will form part of a new guided walking tour in Chalford, Gloucestershire and one of the recently approved projects. © ChalCAN Biodiversity Action

In January the Caring for the Cotswolds Grants Panel met for our biggest meeting yet. The applications had already been reviewed by the Youth Panel and their feedback helped inform the decision making. The Grants Panel approved 14 new applications totalling £25,000! The applications were well balanced across the four themes and there was a good geographic spread from a range of organisations.Please see our press release for more information on all of the successful organisations and projects: Caring for the Cotswolds, Press release Mar 2021

A massive thank you to the members of our Youth Panel 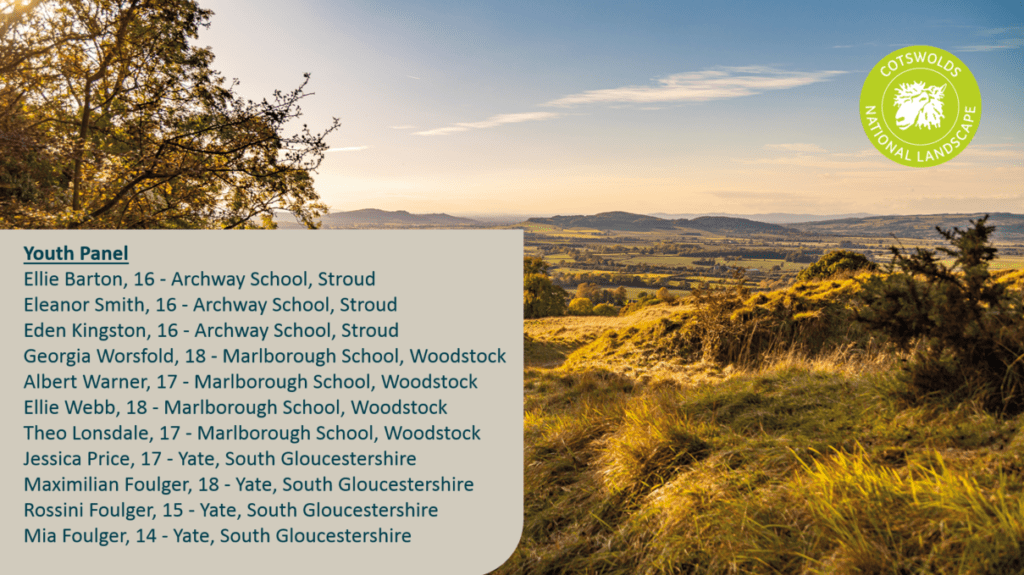 The Youth Panel has played an important role in the review of the recent round of Caring for the Cotswolds applications. Over two sessions, they rigorously assessed each application, which was given a score. They provided commentary to justify the score, gave feedback on the value of the project to the community and analysed the budget.

The Youth Panel did an excellent job, despite all of the pressures of the school timetable, mock-exams and Covid. Well done to everyone involved. 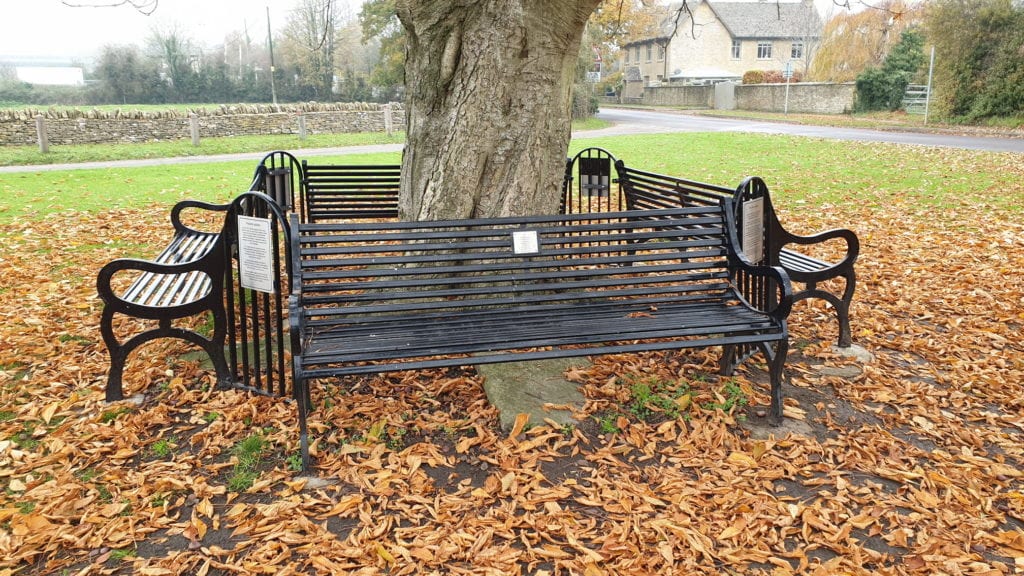 The Ascott Martyrs were sixteen women, some with babies in arms, who were imprisoned in 1873 for supporting their striking farm worker husbands in the Oxfordshire village of Ascott Under Wychwood. The traumatic event led to riots and a reprieve from Queen Victoria. Their legacy today is that picketing was made legal in 1874 and local religious leaders were no longer appointed Magistrates.

The information panels are part of a seat that surrounds a memorial tree, which was planted in 1973 on the village green to commemorate the centenary of the event. Thanks to the Ascott Martyrs Educational Trust and a grant from Caring for the Cotswolds, an important part of Cotswolds history has been brought to life. 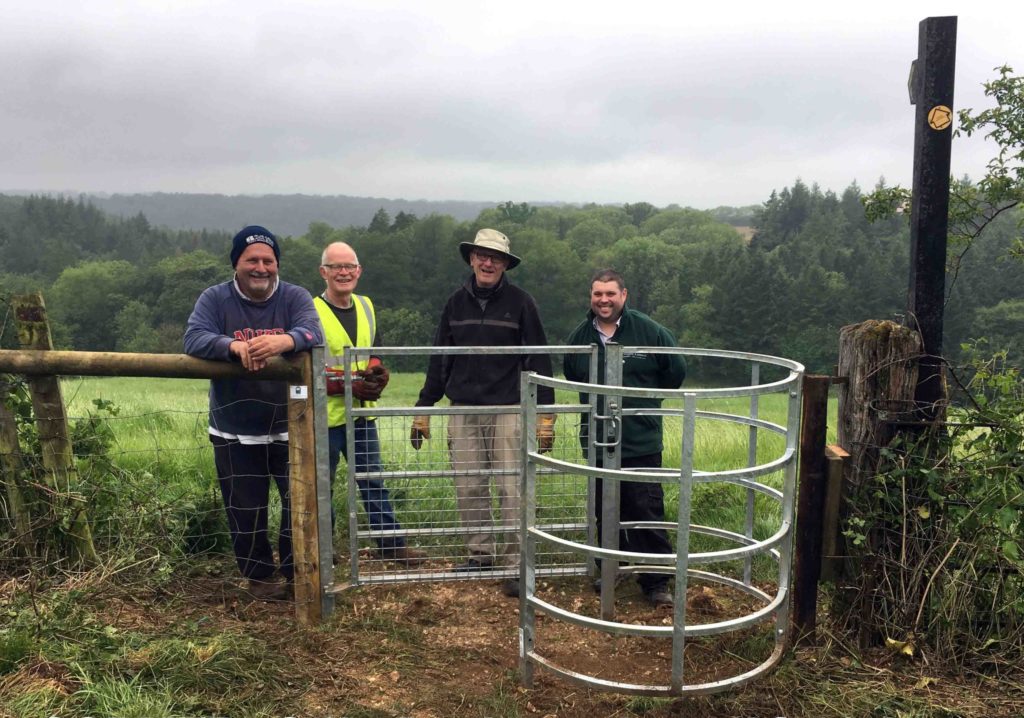 A job well done; one of many improvements to a series of trails completed by the Cotswold Voluntary Wardens in North Wiltshire.

The Heritage Trails Project was developed to encourage the local community and visitors to appreciate the historical environment and experience the natural beauty of the North Wiltshire countryside. This ambitious project was led by the Avon District Cotswold Voluntary Wardens and part funded by the Wardens Countryside Fund.

The first part of the project involved improving the Public Rights of Way (PRoW) and path furniture: stiles, gates, way marker posts and signs. In total 55.48 miles of PRoWs are included in the trails, resulting in a significant number of repairs and installations to make the trails accessible to all. Work included the installation of additional way marker posts and the replacement of some of the stiles with kissing gates, as pictures above.

The second part of the project saw the design of eight trail leaflets so that walkers can learn about local heritage and places of interest as they explore the trails. The improved paths, signage and the leaflets have inspired more people to explore the area, especially during the COVID-19 restrictions. 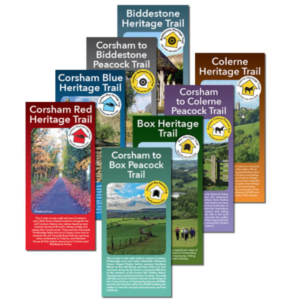 Where summer winds will whisper among the trees 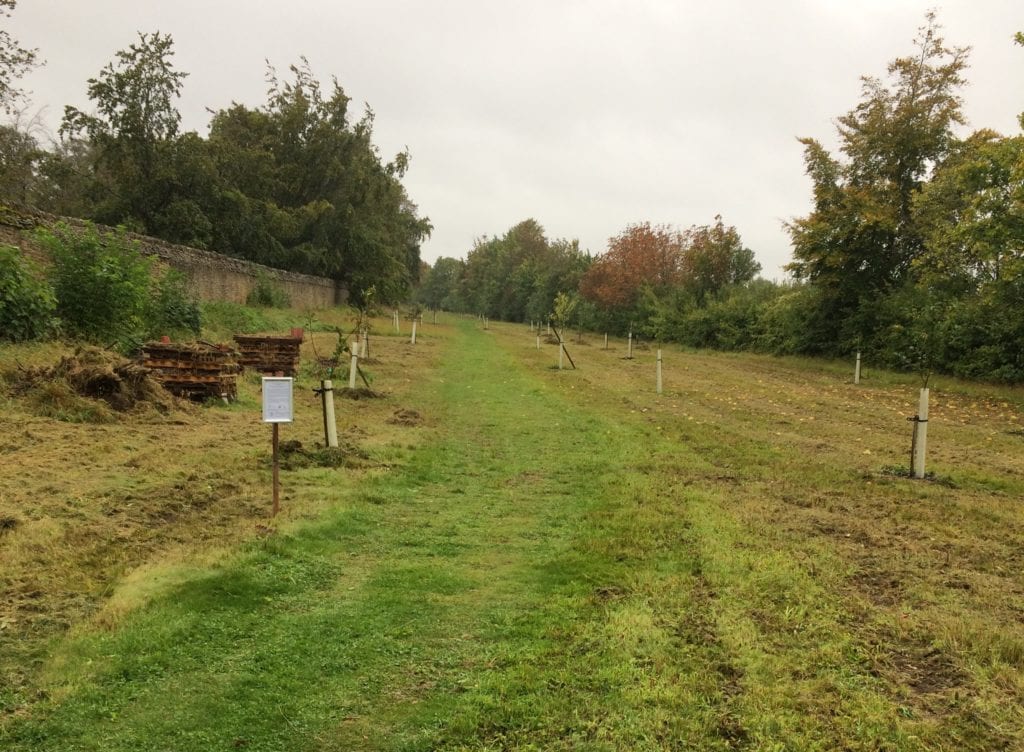 The newly planted community orchard at Sustainable Woodstock, which looked great even on a very wet and windy day! © James Webb

Sustainable Woodstock in Oxfordshire received a Caring for the Cotswolds grant to enhance their site for the local community and wildlife. A permissive path was secured, allowing walkers to pass through and enjoy the site, away from the busy A44. Walkers can now connect to the Oxfordshire Way from Woodstock and either head west in to the Blenheim Estate or on to Stonesfield or east towards Wooton, and vice versa.

The site is a mosaic of woodland and meadows, complete with a community orchard. Native bluebells have been planted in the wooded areas and wildflowers in the meadows. Bird boxes and reptile refuges have been installed across the site and are already attracting a host of furry, feathered and scaly residents!

Two picnic benches were also installed so that visitors and residents can sit and enjoy the site. An added benefit, the benches were made by RAW; a charity that works with people with learning disabilities, mental health problems or those from a disadvantaged background.

Till the cows come home 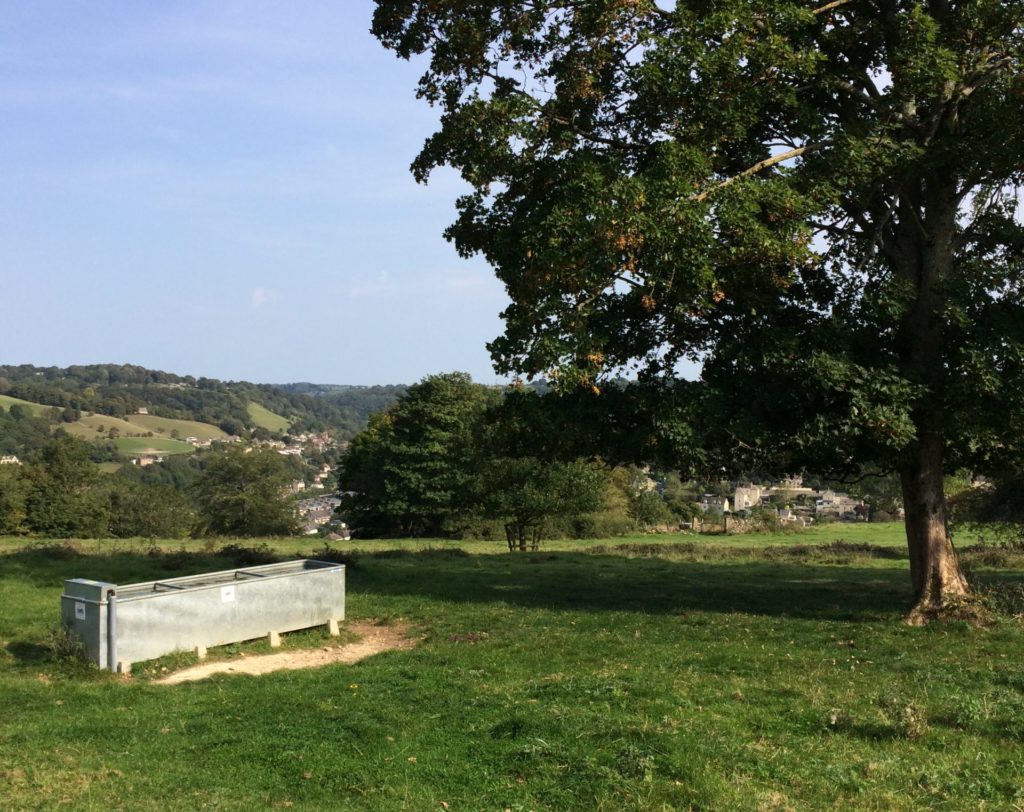 The new cattle trough at Bownham Common with views of the Chalford valley in the distance, © James Webb

At the start of the 2019 grazing season, five new troughs were installed on Minchinhampton and Rodborough Common with a Caring for the Cotswolds grant. At the end of 2020 grazing season we return to see what effect they’ve had.

The new troughs encourage the cattle to visit, stay and graze in the more difficult areas of the common. They also have a much larger capacity than the older style and the cows spend much more time grazing by the big troughs, explains Adrian Bathe, of the Minchinhampton Commoners Committee. The increased grazing improves the conditions for a host of flowers, insects and birds. There are 550 cows out this year; more than in recent years and as a result, the common is looking really good.

Interestingly, fewer cattle have been hit and killed by cars this year. There could be several explanations for this; lockdown meant fewer cars on the road in the spring but the new troughs could also be playing a part, with the cows not wandering as much to find water.

Last year Batsford Arboretum created a new wildflower meadow with the support of a Caring for the Cotswolds grant. The arboretum has quite heavy soil and past attempts to create a wildflower meadow had limited success. The fertile soil is great for fast growing competitive grasses but the smaller, more delicate flowers and herbs don’t stand a chance. So they stripped a thin layer of the fertile soil off and added several inches of stone/rubble to reduce fertility and improve drainage. The area was then seeded with wildflowers and has responded really well. So far the species count includes ox-eye daisy, mullion (verbascum), ragged robin, yellow rattle, spotted orchid, scarlet pimpernel and buttercups.

If it matters, say it in stone

One of the new information boards set in stone on Selsley Common with views of Selsley Church, Doverow Hill, the Severn Vale and Wales. © James Webb

Two impressive new information boards can now be found on Selsley Common and are set in one tonne blocks of limestone. They are located in the areas of highest footfall; one near the main car park and the other (above) on the escarpment over looking at the spectacular views. They will allow visitors to discover more about Selsley Common and the importance of it species rich limestone grassland. It is hoped the boards will address inadvertent damage to the common; in the past some of the most valuable habitat has been set on fire and dug up for cycle-ways, possibly mistaken for waste ground.

Well done to John and all the team at Kings Stanley Parish Council for making this happen.

Back from the brink

A Pearl-bordered Fritillary butterfly resting on a bluebell. © Chris Tracy

This beautiful butterfly was once very widespread but has declined by 95% since the 1970s, and is now highly threatened in England and Wales. In Gloucestershire, the butterfly is restricted to the Bathurst Estate woodlands but thanks to the sterling work by the local branch members of Butterfly Conservation, its fortunes are changing. Butterfly numbers in 2020 have been very good, with some butterflies spreading into new areas. The Caring for the Cotswolds grant has supported targeted habitat management work, including the planting of 700 violets; the butterfly’s food plant. The grant also supported an interpretation board so that people can learn about this threatened butterfly when they visit the site.